A faster and more responsive editor

The editor is much faster and uses much less memory than it used to, resulting in more stability and an overall smoother experience.

You'll notice this especially with bigger projects - at ClockworkChilli we have been working on a very large game made with WADE (more news about this in future posts); the waiting time to preview the game, and the occasional "out of memory" problems were driving us crazy. Someone had to do something about it. And so we did: a clever caching system ensure that we now have a super-zippy editor that can easily handle large projects with hundreds of megabytes of assets.

Speaking of which, you can now decide how much hard-drive space you want to allocate to your WADE projects. Simply click the settings and extensions icon

A much more useful console

Of course your games are very nearly bug free, but occasionally something does go wrong. And when it does, it's now easier than ever to spot what it was - directly from the editor, even without using Chrome's debuggin tools. If you want a full debugger, do use Chrome's debugging tools, which are now much better integrated with the files that you create in the WADE editor, with nicer formatting and all that.

But if you just need a quick look at what went wrong, you can look at console messages that are displayed right below your preview window, as they happen. When there is a runtime error, you will get details of which function (and which object) caused it. Hovering over the function name also shows a code snippet highlighting the line that the error originated from. 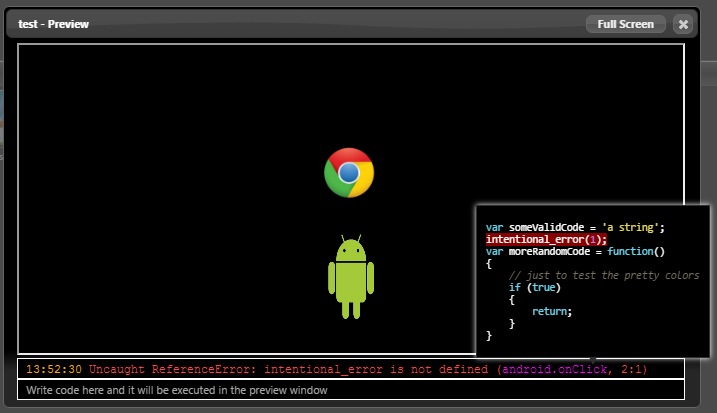 You can also type direct commands in the preview window now - they will be executed in the context of the active preview, and the return value is added to the logs. Much like Chrome's console, you can use the up and down arrow keys to access the command history, and you can log objects as well as plain values.

More control over entities in the editor

A new icon has appeared next to each SceneObject, Sprite and Animation tab

. Clicking it will let you edit the raw JSON data for the selected object, making it easy to import and export single entities, and copy and paste blocks of properties at once.

There is now a convenient button

to duplicate single Animations and Sprites as well as SceneObjects. And Sprites can be moved up and down the list of a SceneObject's Sprites.

More improvements to the API and the editor

As requested by our users, we have added some new fetures to the API: SceneObjects now receive onOverlap events (based on simple axis-aligned bounding box tests, if you need more complex shapes please use wade.physics and the onCollision event).

SceneObjects also have a new interval function that lets you schedule the periodic execution of functions for an object and all of its behaviors, can follow paths with a custom speed and have gained some new handy functions such as isVisible.

We have also added quite a few handy features to the editor, for example when editing Path nodes, you can now set speeds as well as durations (setting one auto-updates the other). You can dowload individual files and folders (folders are downloaded as zip files), and you can edit the active scene's code in the code editor without causing any problems.

Hopefully we now have a better editor and a better engine (thanks for all the suggesions that we have received by the way, they do help us make it better). But have we broken anything? Let us know if you notice anything that doens't quite work as it should and we'll do our best to fix it asap!