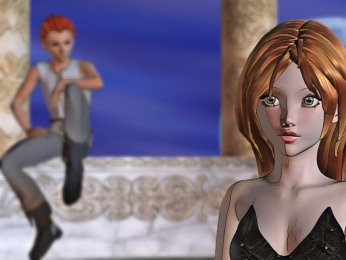 A nice feature that we've added to version 3.8 is the ability to set a blur level for each layer.

What could you do with it? Lots of nice things, for example a fake depth-of-field effect like the one below: move your mouse over the girl in this scene below to see what I mean (you can also go full screen to see it better).

We've added a new wade.tilemap module to handle 2D tilemaps. We will have our own tilemap editor integrated with the WADE IDE for version 4.0, but for now we have a nice API that you can use to load and create your own tile maps in code.

Conveniently, the public interface is very similar to the existing wade.iso interface, so if you are familiar with that you'll feel right at home with it.

As you can expect, the tilemap module deals with collisions and path finding, and we have added a new behavior (called TilemapCharacter) that you can just add to your objects and they will instantly be able to move around the tilemap with keyboard, gamepad and mouse (using pathfinding)

We have a separate blog post about this new API. Be sure to read it and start experimenting with it!

The new WADE is blazing fast

We have rewritten the renderer to support auto-batching of sprites. While we've always had a flexible architecture that allowed you to override a Sprite's draw function with one of your own and create your own batches, now the batching happens automatically in many cases.

In a nutshell, this is how it works: when you call Sprite.draw(), it doesn't actually draw the sprite immediately. Instead it puts it into a queue of Sprites that need drawing. Then WADE processes this queue and, if it detects multiple sprites that are using the same shader and the same texture being drawn in sequence, instead of doing N draw calls, it will create a mesh containing N sprites and perform one single WebGL draw call.

It may sound complicated, but you don't really need to worry about it, as it all happens automatically under the hood. The only thing you will notice, is a massive speed up for many common cases.

You can now set breakpoints directly in the WADE code editor. These will be triggered when you run the preview of the game, if you have the Chrome Debugger open. 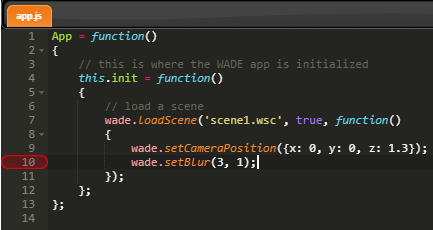 We have a new way of generating Android apps from your WADE project, that is faster than ever. It also generates much, much smaller files.

Most importantly, the new system allows you to generate signed Android apps (using your own key store if you like, or it can create a new one for you). This allows you to publish the app, as it is, directly in the Google Play Store. 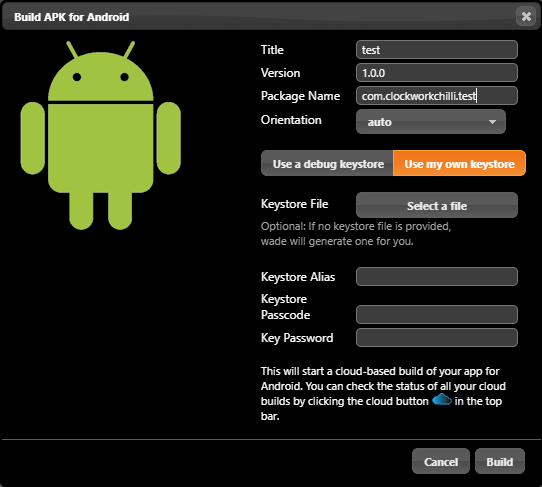 It works with Android 5.0 and newer.

Just be sure to have a look at the change log for a full list of new features and bug fixes.